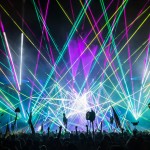 Well, another Camp Bisco has come and gone. For those who aren’t familiar, Camp Bisco is a music festival in New York state. It features a host of leading electronic and jam acts. This year was Camp Bisco 12, and was my second visit to the festival.

The Disco Biscuits, the festival organizing band and leading act of the weekend, absolutely killed it. Having attended a terrible set or two of theirs preceding Camp Bisco 11, I’ll admit that I was never a huge fan. That said, they impressed the shit out of me in 2012, and this time around, they absolutely blew me away! Instrumentally, the Biscuits never fail to provide an entertaining and ecstasy inducing plume of good vibes. They methodically change character through every song and can endlessly seem together huge jams. While i’d like to do a song for song breakdown and discuss my favorite set that would just take too long and as I do not consider myself a Biscuits expert I feel I’d just embarrass myself anyways. That said, every time I see the Biscuits they impress more than the last. As a result the Biscuits are quickly rising to the top of my favorites and I hope that they can find their way to Pittsburgh!

As for other highlights of the festival, there are many. I’ll continue with one of my all time favorites. Sound Tribe Sector 9 came on the stage ready to please an enthusiastic crowd and they did just that. I spoke to one die-hard EDM fan who walked away declaring a melted face and stated that STS9 had changed his life. While the set was not the best one I have encountered, it certainly was solid. As for me, I managed to find a solid standing spot just off the corner of the VIP area which was only about 60 feet from the front of the stage. The crowd gathered a little slower than I anticipated and at the start of the show there was in fact a great deal of grooving room. However, once the band got into its first jam the crowd clamored to get a piece of the STS9 action. The crowd did remain a bit loose and left a nice amount of room for some footwork. The rest was history. They threw down a very solid set that left me, and I have to believe many others as well, craving more of the Tribe.

Lotus is my other favorite and at Bisco 12 they held down a late night set. I could not have been more excited for this. Not only do you get to bask in late night cool air, but the crowds tend to shrink by the time the late night act starts. This late night certainly delivered on these principles. Not only did I find myself mixed into a sociable and rather cool bunch of people, but Lotus threw down a surprising set. This set was not only surprising but was also memorable, this a result of Baauer’s LD unplugging (DJ from a previous set) and setting them up for an impromptu drum jam. Soon enough though the guitars tickled their way back into action and picked right back up with Middle Road where they had left off. Most in the crowd had not even noticed that the technical difficulty had occurred and continued to jam out as though it was all a part of the plan. It certainly left a lasting impression on me, as I was informed during the drum solo by my tall friend that it was a malfunction.

Other notables during the festival included Boombox, who really cranked out a chill and groovy late night themselves. The Manhattan Project, who was admittedly on my list of groups to see, but not really a favorite of mine threw down an awesome mid day set. Check them out of you want some jam-tronica in your life. The Umphreys McGee set was everything you could ask for from a staple on the jam circuit and left me wanting more. Com Truise offered his down tempo and somewhat quirky set. Truise, hailing from Oneida, just a short drive from the Bisco stomping grounds is worth a listen. On Friday I had another encounter with The Werks and once again they did not fail to produce an amazing show. From the start of their set to the end I noticed that the crowed multiplied by at least three fold. That alone goes to show the draw of these guys. The list goes on from here and I certainly missed more than few notables, but all in the weekend was pure bliss. Thanks goes out to the Disco Biscuits for throwing an awesome festival! I can not wait for next year as Camp Bisco is quickly becoming a tradition of mine.