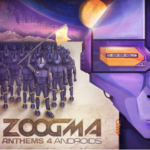 Those that stop here regularly know I made at least two posts in regards to the Zoogma Kickstarter campaign. Not only was the campaign successful, I got the album a week early because I pledged one dollar. Was that one dollar investment worth it?

I’ll preface this by saying I have been a fan of Zoogma for approximately two years now. I’ve seen them live on a few occasions and have of course listened to their albums countless times. That means I’m a fan and am almost certainly going to review the album positively.

If you aren’t familiar with their style, they produce a beat driven jam that is fused with an almost but not quite electronic dance style of music. Often the sound moves from a slower paced rock style into something that is akin to a house style beat. Over top of this they play long sprawling guitar riffs and add in synthesized harmonies.

I’m an album kind of guy. I like to hit play at track one and then sit back and wait for the album to end. I rarely listen to artists that do not satisfy me in this way. Five days on and the album is really growing on me. Song to song, the album introduces a new sound at each change. Zoogma never seems to lose track of their roots during the album while presenting enough variance to keep the ear keenly attached to the speaker output. The music can be groovy at one point and almost sinister the next, and this ability has created an album that never bores.

The seventh track of the album represents a small departure from Zoogma’s standard format. The song titled, “Anthems 4 Androids” which is a likely centerpiece for the album is heavily hip-hop inspired. This lyrically driven piece is certainly out of the norm for Zoogma, but in my estimation is a very solid addition to this collection. It’s a laid back song with a nice beat that provides a moment to relax in what is a pretty energetic album. I thoroughly enjoy this track every time I hear it.

I find the album exciting at points, almost ambient at others, and overall very interesting.  Album length comes in at a cool 57.6 minutes and has 11 total songs. If jamtronica is your type of thing, or if you simply want to try new sounds, this Zoogma album is worth a shot. Anthems 4 Androids will release on August 17th, so start looking for it then. Previous albums have all been available free charge at Zoogma.net. Be sure to check back there for download on the 17th.